Gegharkunik (Armenian: Գեղարքունիք, Armenian pronunciation: is a province (marz) of Armenia. Its capital and largest city is the town of Gavar.

Gegharkunik Province is located at the eastern part of Armenia, bordering Azerbaijan and the Shahumyan Region of Nagorno-Karabakh Republic. With an area of 5,348 km², Gegharkunik is the largest province in Armenia. However, approximately 1,278 km² of its territory is covered by Lake Sevan, the largest lake in the Caucasus and a major tourist attraction of the region.

The village of Artsvashen province has an exclave inside Azerbaijan is also a part of the province. However, it was attacked and forcefully occupied by Azerbaijan during the Nagorno-Karabakh War.

The Yerevan-Sevan-Dilijan republican highway runs through the province.

The name of Gegharkunik is derived from Gegham, a 5th-generation Haykazuni King and one of the descendants of the legendary patriarch and founder of the Armenian nation Hayk. Gegham was the father of Sisak (founder of the Siunia dynasty), and Harma (grandfather of Ara the Beautiful). Gegham mountains and the Lake of Gegham (currently known as Lake Sevan) were also named after Gegham.

Gegharkunik Province occupies the east of the central part of modern-day Armenia. With an area of 5,349 km² (18% of total area of Armenia), it is ranked first among the provinces of Armenia in terms of the total area.

Historically, the current territory of the province mainly occupies the Gegharkunik and Sotk cantons of Syunik province of Ancient Armenia, along with parts of Mazaz and Varazhnunik cantons of Ayrarat province.

Gegharkunik Province is situated at the east of modern-day Armenia, surrounding the Lake Sevan. Within the Republic of Armenia, it has borders with Tavush Province, Kotayk and Ararat provinces from the west and Vayots Dzor Province from the south. TheDashkasan and Gadabay districts of Azerbaijan, and the Shahumyan Region of Nagorno-Karabakh Republic form the eastern border of the province.

The Artsvashen Armenian exclave of Gegharkunik Province is currently occupied and controlled by Azerbaijan.

The highest point of the province is mount Azhdahak of the Gegham mountains with a height of 3597 meters. Lake Sevan occupies the central part of the province, lying at a height of 1900 meteres above sea level and covering an area of 1260 km². (around 23.5% of the area of Gegharkunik).

The climate of Gegharkunik is cold and snowy in winter, while the summer is characterized with warm and humid climate. The annual precipitation level ranges between 500 and 600 mm at below 2000 meters, while it may reach up to 1000 mm in the mountainous areas.

Lake Sevan is the largest body of sweet water in Armenia and Southern Cucasus. With a volume of around 32.92 billion m³ of water, Sevan is of a major environmental importance for the entire region.

Getik, Gavaraget and Masrik are the main rivers of the province.

From 1930 until 1995, modern-day Aragatsotn was divided into 5 raions within the Armenian SSR: Sevan raion, Kamo raion, Krasnoselsk raion, Kamo raion and Vardenis raion. With the territorial administration reform of 1995, the 5 raions were merged to form the Gegharkunik Province.

Cathedral of the Holy Mother of God in Gavar, the seat of the Diocese of Gegharkunik of the Armenian Church

Gegharkunik Province is almost entirely populated by ethnic Armenians who belong to the Armenian Apostolic Church. The regulating body of the church is the Diocese of Gegharkunik, headed by Bishop Markos Hovhannisyan. The Holy Mother of God Cathedral in Gavaris the seat of the diocese.

The villages of Chkalovka (formerly Aleksandrovka) and Semyonovka were founded by Russian Molokans during the 1st half of the 19th century. Currently, very few Molokans are still residing in the 2 villages.

The regions of Vardenis and Chambarak used to have a significant minority of Azerbaijani population. However, after the break-out of the Nagorno-Karabakh War in 1988, the Azerbaijanis were expelled and replaced by Armenian refugees who were displaced from several regions of Azerbaijan.

The economy of Gegharkunik Province has a predominantly agricultural orientation, including farming and cattle-breeding. It has a share of 18% in the annual total agricultural product of Armenia. Around 65% (3,487 km²) of the total area of the province are arable lands, out of which 27.3% (951.5 km²) are ploughed. Around 60,000 farms in Gegharkunik are operated by the private sector. The main crops are potato and grains.

Fishing and fish farming is also dominant in the province. Recently, beekeeping has significantly developed.

The town of Sevan is home to the beer manufacturers “Lihnitis Sevan Brewerey” company with a variety of lager beer under the brand “Kellers”. It is also home to the Sevan Bakery Factory and the Sevan Sugar Plant.

The Sotk gold mine near Vardenis has one of the largest gold deposits in Armenia. It is owned and operated by the “Geopromining Gold” company.

Many small dairy and bakery enterprises are still operating in Gegharkunik since the Soviet times.

The water park in Sevan

Tourism services in Gegharkunik are seasonal. The towns of Sevan, Chambarak and Martuni along with their surrounding beaches are a major summer destination for locals and foreigners with many hotels and resorts. The cultural heritage and the natural monuments of the region attract the tourists too.

During the last decade, many new hotels and spa resorts were opened along the coast of Lake Sevan, including the Harsnaqar Sevan hotel and water park, the Akhtamar Sevan hotel, the Tufenkian Avan Marag hotel of Tsapatagh, the Kaputak Sevan rest house near Chambarak, the Maria Resort of Sevan, the Best Western Bohemian Resort Sevan, and the Lavanda City cottages.

Many forests of the province are listed among the protected areas of Armenia, including the Sevan National Park, the Getik Sanctuary, the Juniper Woodlands Sanctuary of the mountains of Sevan. There is also a botanical garden in Sevan. 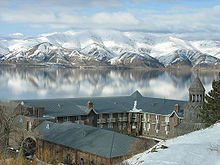