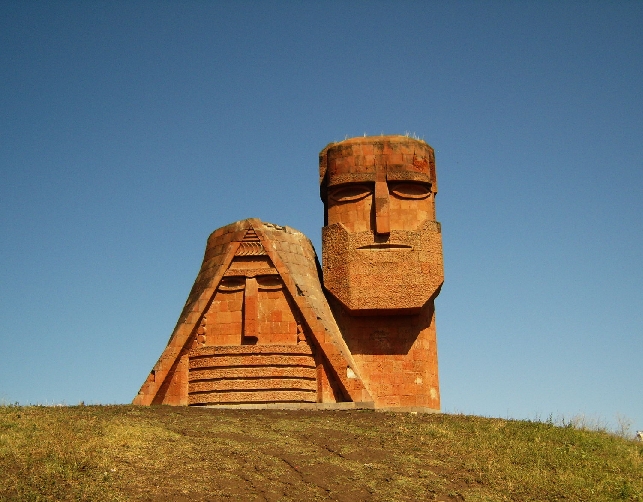 Karabakh (Armenian: Ղարաբաղ Gharabagh or Արցախ, Artsakh; Azerbaijani: Qarabağ) is a geographic region in present-day eastern Armenia and southwestern Azerbaijan, extending from the highlands of the Lesser Caucasus down to the lowlands between the rivers Kura and Aras. It includes three regions: Highland Karabakh (historical Artsakh, present-day Nagorno-Karabakh), Lowland Karabakh (the southern Kura-steppes), and a part of Syunik.

Origins of the name

The name “Karabakh” or “Gharabagh” is generally believed to originate from Turkic and Persian, literally meaning “black garden”. An alternative theory, proposed by Bagrat Ulubabyan, is that it has a Turkic-Armenian origin, meaning “Greater Baghk”, a reference to Ktish-Baghk (later: Dizak), one of the principalities of Artsakh during the eleventh to thirteenth centuries.

The placename is first mentioned in the Georgian Chronicles (Kartlis Tskhovreba), as well in Persian sources from the thirteenth and fourteenth centuries. The name became common after the 1230s, when the region was conquered by the Mongols. The first time the name was mentioned in medieval Armenian sources was in the fifteenth century, inTovma Metsop’etsi’s History of Tamerlane and His Successors.

Lowland and Highland Karabakh, which was populated with various Caucasian tribes, were believed to have been conquered by Armenians in the second century B.C. and organized as the Artsakh province of the Kingdom of Armenia. However, it is possible that the region had earlier been part of Orontid Armenia from the fourth to second centuries B.C. After the partition of Armenia by Rome and Persia in 387 A.D., it became a part of the Caucasian Albanian satrapy of Sasanid Persia. The Arab invasions later led to the rise of several Armenian princes who came to establish their dominance in the region.Centuries of constant warfare on the Armenian Plateau forced many Armenians, including those in the Karabakh region, to emigrate and settle elsewhere. During the period of Mongol domination, a great number of Armenians left Lowland Karabakh and sought refuge in the mountainous (Highland) heights of the region.

In the fifteenth century, the German traveler Johann Schiltberger toured Lowland Karabakh and described it as a large and beautiful plain in Armenia, ruled by Muslims. Highland Karabakh from 821 until the early ninthteenth century passed under the hands of a number of states, including the Abbasid Caliphate, Bagratid Armenia, the MongolIlkhanate and Jalayirid Sultanates, the Turkic Kara Koyunlu, Ak Koyunlu and Karabakh Baylarbaylik states of the Safavid Empire. Armenian princes times ruled as vassal territories by the Armenian House of Khachen and its several lines, the latter Melikdoms of Karabakh. The Safavids appointed the rulers of Ganja khanate from Ziad-oglu Qajar family to govern Karabakh. It was also invaded and ruled by Ottoman Empire between 1578-1605 and again between 1723-1736, as they briefly conquered it during theOttoman-Safavid War of 1578-1590 and during the disintegration of Safavid Iran, respectively. In 1747, Panah Javanshir, a local Turkic chieftain, seized control of the region after the death of the Persian ruler Nadir Shah, and both Lower Karabakh and Highland Karabakh comprised the new Karabakh Khanate. the Iranian Qajar dynasty reestablished rule over the region several years later.

In 1813, under the terms of the Treaty of Gulistan, the region of Karabakh was lost by the Persians to the Russian Empire. Under Russian rule, Karabakh (both Lowland and Highland) was a region with an area of 13,600 km2 (5,250 sq mi), with Shusha (Shushi) as its most prominent city. Its population consisted of Armenians and Muslims (mainly of “Tatars” (Azerbaijanis), but also Kurds). The Russians conducted a census in 1823 and had tallied the number of villages (though not the number of people) and assessed the tax basis of the entire Karabakh khanate, which also included Lowland Karabakh. It is probable that the Armenians formed the majority of the population of Eastern Armenia at the turn of the seventeenth century, but following Shah Abbas I’s massive relocation of Armenians in 1604-05 their numbers decreased markedly, as they eventually became a minority among their Muslim neighbors.

According to the statistics of the initial survey carried out by the Russians in 1823 and an official one published in 1836, Highland Karabakh was found almost overwhelmingly Armenian in population (96.7%).On the other hand, the population of the Karabakh khanate, taken as a whole, was largely made up of Muslims (91% Muslim versus 9% Armenian). A decade after the Russian annexation of the region, a large number of Armenians who had fled Karabakh during the reign of Ibrahim Khalil Khan (1730-1806) and settled in Yerevan, Ganja, and parts of Georgia were repatriated to their villages, many of which had been left derelict. An additional 279 Armenian families were settled in the villages of Ghapan and Meghri in Syunik. Though some of the returning Armenians wished to settle in Karabakh, they were told by Russian authorities that there was no room for them. This took place at the same time as a large number of the Muslims of the region departed for the Ottoman Empire and Qajar Iran. The percentage of Armenians accordingly increased to 35% in 1832 and 53% in 1880. These were also seen as consequences of Russo-Turkish wars of 1855-1856 and 1877-1878 because Russians saw the Muslims as unreliable and allies to their ethnically close Turks.

In 1828 the Karabakh khanate was dissolved and in 1840 it was absorbed into the Kaspijskaya (Caspian) oblast, and subsequently, in 1846, made a part of Shemakha Governorate. In 1876 it was made a part of the Elisabethpol Governorate, an administrative arrangement which remained in place until the Russian Empire collapsed in 1917.

After the dissolution of Russian Empire Karabakh, Zangezur and Nakhchivan were disputed between newly established republics of Armenia and Azerbaijan. Fighting between two republics broke out. Following the defeat of the Ottoman Empire in World War I, British troops occupied the South Caucasus. The British command affirmed Khosrov bey Sultanov (an appointee of the Azerbaijani government) as the provisional governor-general of Karabakh and Zangezur, pending a final decision by the Paris Peace Conference. But in 1920, Azerbaijan and Armenia were sovietized and Karabakh’s status was taken up by the Soviet authorities.

In 1923, parts of Karabakh were made a part of the newly established Nagorno-Karabakh Autonomous Oblast (NKAO), an administrative entity of the Azerbaijan SSR, leaving it with a population that was 94% Armenian. During the Soviet period, several few attempts were made by the authorities of the Armenian SSR to unite it with the NKAO but these proposals found no support in Moscow.

In February 1988, within the context of Mikhail Gorbachev’s glasnost and perestroika policies, the Supreme Soviet of the NKAO voted to unite itself with the Armenia. By the summer of 1989 the Armenian-populated areas of the NKAO were under blockade by Azerbaijan as a response to Armenia’s blockade against Nakhichevan, cutting road and rail links to the outside world. On July 12 the Nagorno-Karabakh AO Supreme Soviet voted to secede from Azerbaijan, which was rejected unanimously by the Supreme Soviet of USSR, declaring NKAO had no right to secede from Azerbaijan SSR under Soviet Constitution. Soviet authorities in Moscow then placed the region under its direct rule, installing a special commission to govern the region. In November 1989 the Kremlin returned the oblast to Azerbaijani control. The local government in the region of Shahumianalso declared its independence from the Azerbaijan SSR in 1991.

In late 1991, the Armenian representatives in the local government of the NKAO proclaimed the region a republic, independent from Azerbaijan. Portions of the lowland Karabakh are now under the control of the Karabakh Armenian forces. The region’s Azerbaijani inhabitants were forced to leave the territories remaining under Armenian control.